Florida, the Sunshine State is known for many things such as its beautiful weather and beaches. 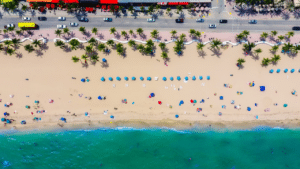 While many flocks to Florida for vacations and time away from inclement weather in other states, some are lucky enough to live within its borders. For some individuals though, living with alcohol or drug addiction is no day at the beach. If you or someone you know is dealing with drug or alcohol addiction issues there is help and a light at the end of the tunnel.

Ibogaine detox centers are known for their success rates of individuals who have battled an addiction to drugs and alcohol with no success at other treatment centers. You are not alone if you have tried to break the cycle of drugs and alcohol with no luck so far. There are many trained individuals who can aid you with Ibogaine treatment plans that are tailored to you to improve your chances of success. Call David Dardashti right now at 1-888-462-1164 to discuss how Ibogaine therapy and treatment can help get you back on the right track and back to living your life. No matter when you call, 24 hours a day, 7 days a week, trained staff are here to answer any questions or concerns you may have and get you started on an effective plan to suit your needs.

The area of Florida poses many advantages for those looking to traffic many illegal substances including cocaine, heroin, and methamphetamines. Due to the location, it is a prime spot to move drugs from the northeastern United States up into Canada. With a number of international airports and the short distance that lies between Florida and the Bahamas, it is no wonder that smuggling occurs quite often. The mix of racial nationalities in the Florida area has several ties covered from Central and South America all the way to Columbia and even Mexico. These large trafficking organizations utilize Florida as a means to an end, with individuals suffering from abuse all around the state.

Comparing Florida to other states

Marijuana, pharmaceutical, and alcohol abuse are relatively low for those residents of Florida ages 18-25 while the numbers just increase slightly once they hit 26 years of age and older to an average amount of individuals using and abusing marijuana and alcohol. When exploring more illicit drugs and cocaine use, the statistics show moderately low usage for those ages 18-25 while again the numbers increase slightly for those who are 26 years of age and older. Any numbers of alcohol and drug abuse are bad numbers and should be taken seriously. If you or someone you know is battling an addiction, be sure to check out Ibogaine therapy and detox centers to get the help you need.

A closer look and the substance prominent in Florida

A primary threat. Cocaine from South America comes directly to Florida or through the Mexican border. A major transportation route across the Caribbean is via the Bahamas. Although cocaine is consumed in Miami, most of it is distributed from there to Naples through Tampa Bay and outside the state. Mexican sources transport cocaine into Tampa Bay, where demand is mainly for conversion to crack. African-American and Haitian traffickers and street gangs dominate crack distribution that is mostly around public housing and in the inner cities.

A center for Internet sales. Internet holding companies, particularly in Tampa, organize websites, physicians, pharmacies, and pharmaceutical wholesalers. The result is a serious threat with many people dying from a prescription drug overdose. Benzodiazepines and methadone are the most commonly abused. Hydrocodone products and oxycodone products are also a problem.

Widespread with increased use in central Florida. Mexican traffickers move the drug in multi-pounds along the Southwest Border. Super labs in Texas and California bring in the drug along the Interstate 10 corridor. Crystal meth in high-purity levels comes from Atlanta. Most in-state labs are small, quick-cook ones that are set up anywhere and very portable.

Ecstasy most readily available dangerous drug throughout Florida. College students, especially during spring break, use Ecstasy at clubs and rave parties, often with other drugs. LSD is available, as is GHB, particularly in and around colleges and universities.

Domestically grown and imported. Indoor grow operations are equally in rural and residential areas throughout the state. Marijuana grown in-state is coveted because its quality is better than that from Jamaica or Mexico. Cultivation benefits from the sale of hydroponics equipment in many retail stores.

BC Bud, popular in northeast Florida, comes from Canada. However, marijuana is also imported from the Bahamas through Caribbean poly-drug traffickers and from the Southwest Border.

Somewhat of a threat.

Not significant in state. The majority of heroin entering Florida goes to the East Coast. Miami International Airport is the main transportation venue. Often heroin comes with cocaine, smuggled in legitimate cargo such as Colombia flowers. Cruise ships are another major method of transport. Most users are in Orlando, where heroin is a major threat. Their sources are South American. Heroin in southwest Florida and Tampa comes from Miami, Orlando, and New York City. Most of the trafficking organizations have ties to Colombia and New York.

Florida residents over the age of 26 have an increased chance of using and abusing drugs and alcohol. Out of those with addiction issues, many are not registered in or receiving detox treatment. If you or someone you know needs to get involved in an Ibogaine treatment plan in order to turn their lives around, Call David Dardashti right now at 1-888-462-1164 any time of the day or night and see how the Ibogaine treatment process can free you from your addiction.