This video reveals the real-life experiences of two former patients who have lived differently after their treatment. Robert and Gavriel were able to revive themselves with the help of David Dardashti and his rehabilitation team. 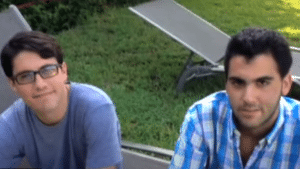 Frankly, Robert is very satisfied with the treatment and his brand new lifestyle and he is here for a second time, in order to follow an Ibogaine booster therapy. He was so satisfied with Ibogaine that he went back and did a lovely paper over it. It was only eight months ago that he first visited the clinic and he says that he was lucky enough to get the assistance of the clinic at the right time.

Robert was basically struggling with the addiction to Benzodiazepines a long time ago. He looked for help because the drugs caused him a great deal of anxiety which he was adamant to get rid of and, thankfully he achieved that in a miraculous way. He recalls the journey in a complete review of his life since he was 12. He was able to handle many negative emotions that he faced in difficult moments of his life. The whole process helped him to detect the real cause of his anxiety.

Now Robert is studying science and would be interested in pursuing medicals which would encourage other patients like him to rebuild their lives. Gavriel has been a great companion of him for some time. They together worked out the similar problem of drug addiction and they helped each other in the time of struggle. They advise that anyone who has attended Ibogaine can like its page and thereafter, communicate with other beneficiaries of the program in order to develop a bonding that would remain a source of inspiration for resistance in similar addictions in the future.

The page of Ibogaine supports the network and provides to its patients the opportunity to live a life-changing experience. This effort is very important for its creators because it keeps people off the program in touch. Also, this is a way to create a kind of awareness about the advantages and disadvantages of drug addiction and motivates the patients to resist temptations by seeing their fellow beneficiaries.

Today, Robert is studying medicine and helps people fight different kinds of health-related issues like hepatitis, blood sugar problems, diabetes, Parkinson’s, and anything he could do for the improvement of humanity.
The cured ones find the Ibogaine treatment and the rehabilitation therapy an unbelievable encounter which forced them to grow emotionally, physically, and spiritually as well. It aided them to combat the ailment they were suffering without much friction.

Gavriel also finds it the most effective treatment in the natural step towards recovery. It awakens the different types of receptors that are suppressed due to the drugs and enables the patient to be livelier. Moreover, he adds that every drug addict faces three major issues which are detox, memory, and depression. Ibogaine’s treatment helps the patient at these root issues by getting him/her back to a life free of dependency on drugs.