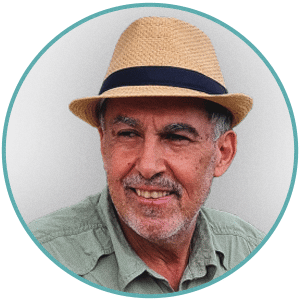 Growing up, David had a strong curiosity for science and spirituality. He left his hometown, through the consent of his parents, at the age of 12. He studied in an agricultural school, working from 5 o’clock in the morning until noon and then going to school until 8 o’clock at night. Throughout this time, his love of nature and curiosity for science would grow as he combined spirituality and science through nature.

His life has been busy, with education and entrepreneurship at the heart of everything he does. David has an immense passion for life and for helping others. This passion has changed the direction of David’s life many times, landing him comfortably where he is today healing others at the Ibogaine Clinic in Mexico which he founded nearly 12 years ago.

David was born in Iran. His father, a well-known singer, was a very close friend of the Shah of Iran. The political change would cause David and his family to move to Israel where he would attend agricultural school. Here he learned and worked at the same time, constantly dealing with both science and nature.

David started to develop a tremendous love for science by observing nature. His work with the symbiotic Mother Nature and animals developed the early connection to spirituality that David would continue to grow and develop as the years passed. This led to an interest in studying the Talmud and Kabbala.

For more than 30 years David studied and performed in-depth research of the scientific world. He became curious as to why, with all of the components of a cell available, “why can’t we create one living cell?” This curiosity became the basis of David’s research for many years, but despite the knowledge he gained, the question remains unanswered.

David attended grade school and high school in Israel and the US, graduating from Jamaica High School, NY. Upon his graduation, David would spend 3 years in the Israeli army. During his time of service, he was subjected to immense trauma as most military veterans are. Although he would not let this stop him, it plays a key role in his later (and current) path of healing others.

As a young adult, David moved to the United States to study music at Florida Atlantic University. His musical talent would continue to play a role in his everyday activities later in life. Even today, at the Ibogaine Clinic, that David Dardashti founded, the music that is played for patients during their ibogaine treatment is a compilation that David himself put together specifically for the treatment.

For many years David has continued to focus on education. A theologian, both in spirit and in kind, David continues to learn through the Talmud and the Kabala. His studies deeply center around the human psyche both conscious and subconscious.  He studied the approach of the philosophy and medicine by ancient Greek philosophers and physicians like Socrates, Aristotle and Plato. Much of David’s influence in research, healing and medicine is based on his deep understanding of the 12 century Scholar, Physician and philosopher Maimonides approach to spirituality and medicine.

This too plays a role in his current, long-time passion to heal others. David’s theology background and continued education affords him the ability to provide clarity and true meaning behind the spiritual component of the ibogaine treatment he provides to his clients today. This approach to medicine involves understanding the anatomy of the human body and the source of the illness.

Personal research, and a passion for helping others overcome addiction to drugs or alcohol and live a life free from the burdens of various diseases and illnesses are guiding factors in David’s life. This approach didn’t come to him so easily.

David understands the individuals he treats so well because he has once addicted to opiates himself through prescribed medication. In 1998 Ibogaine was not yet known. David was forced to take the approach of quitting opiates (cold turkey). This led him to a year of total misery, suffering from withdrawal, cravings, and severe depression in order to become totally sober.

This amazing entrepreneur would graduate with a bachelor’s degree in Music from Florida Atlantic University. He would later go on to found and operate a major commercial real estate company in the United States. As a real estate developer developing major shopping centers, office buildings, and hotels, David would meet many people from all walks of life. Unfortunately, he would also find himself suffering from migraine headaches that made it difficult for him to perform his everyday routines related to his business.

To treat the migraines, which were likely the result of executive burnout, David was prescribed an opiate. The powerful painkiller helped for a short time, but quickly became an addiction that caused great shame, guilt, and depression for David. Although he was still operating a very successful commercial real estate development business, David was suffering deeply with his addiction to opiates and desperately needed to find a treatment option that worked.

Immediately after becoming sober. By chance, or by God’s will, whichever one you choose to believe, one day David was introduced to ibogaine. It gave him another entrepreneurial outlet that would take more learning in order to grow. And, since learning and entrepreneurship are two of David’s greatest passions, it’s no surprise that he would spend the next two decades following his passions and developing effective healing methods and individual ibogaine treatment protocols to help countless others heal from years of substance abuse, PTSD, depression, anxiety or other neurological disorders.

David’s fiery passion for ibogaine treatment stems directly from his own experience with ibogaine.

Ask David and he will tell you that ibogaine provided him perception that he had never had before.  He has been known to say, “One can become spiritual only when lifted from the boundaries and limitations of the physical body and connected to the highest levels of consciousness—to the soul.” Finally, after years of suffering, David found the connection he was seeking, between his subconscious and his conscious self to become more self-aware.

In a dramatic response to the impact that David’s ibogaine treatment had on his life, and his ability to understand WHY he became addicted and what he could do to finally heal from years of trauma and pain, David founded the Ibogaine Clinic in Mexico. Since founding the Mexico ibogaine clinic, David has helped thousands of people to better understand ibogaine and the natural healing powers of this substance.

David has a unique ability to heal using Maimonides practices and strategies which, when paired with his thorough understanding of human anatomy and ibogaine treatment, can get to the root of one’s problem in a simple, logical manner. Ask David how ibogaine works and he will tell you that it’s all about simplicity and logic—everything in the human body is about logic.

David found out that pure ibogaine is not psychedelic and should not be called psychedelic. He found that the true experience is that of perception. Ibogaine triggers the central nervous system which in turn ignites the brain to communicate with the rest of the body to heal itself and allows the understanding of one’s own powers and abilities through the subconscious.

Through his research, and many years of treating people, David has found that ibogaine, “helps the individual bypass physical withdrawal and cravings, but it is the cleansing of the spirit that is the first step to a lasting recovery.” The theologian in him continues to find connections between addiction and the workings of the human spirit. David believes strongly that ibogaine contains powers proven on a physical and spiritual level.

David truly loves helping others and his passion for ibogaine is very much related to his passion to heal and help others find wellness. The Ibogaine Clinic has focused largely on addiction, depression, and PTSD treatment for many years, but the healing powers of ibogaine and David’s candid nature allow for a treatment experience like nowhere else. David’s ongoing research extends into the use of ibogaine in the treatment of the following conditions:

David would like to help anyone else and encourage others to spread the word to help others to experience this miracle substance. Perception and healing through the subconscious by triggering one’s own body, the greatest source, past present, and future to heal itself is truly miraculous.

David truly loves helping others and his passion for ibogaine is very much related to his passion to heal and help others find wellness. The Ibogaine Clinic has focused largely on addiction, depression, and PTSD treatment for many years, but the healing powers of ibogaine and David’s candid nature allow for a treatment experience like nowhere else. David’s ongoing research extends into the use of ibogaine in the treatment of the following conditions:

David would like to help anyone else and encourage others to spread the word to help others to experience this miracle substance. Perception and healing through the subconscious by triggering one’s own body, the greatest source, past present, and future to heal itself is truly miraculous.

* All indicated fields must be completed. Please include non-medical questions and correspondence only.